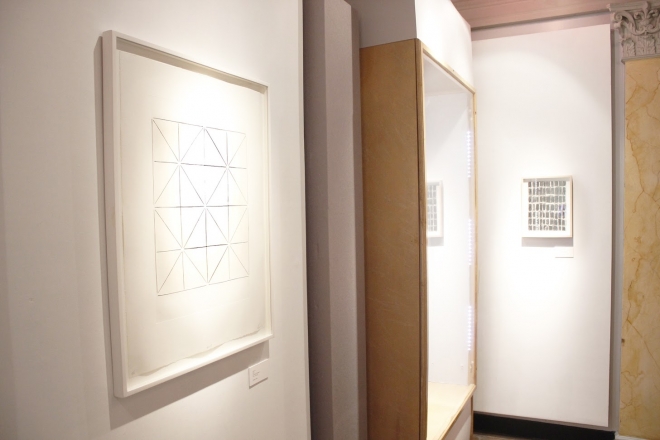 Linda Karshan was born in Minneapolis, is of Romanian descent, and both lives and works between London and the States. She attended Skidmore College in New York in the 1960s, studying under the architect Robert Reed, a former student of Joseph Albers (Bauhaus and Black Mountain College). As a result, she was well-schooled in the principles and practices of Modern minimalism and abstraction. She first exhibited in Munich in 1991, and since this juncture has done so across Europe and America, including one in Romania tracing her roots.  More recently, Karshan has established a regular collaboration with Niels Borch Jensen printmakers in Germany.

Principally, Karshan’s practice is about the relationship between the body and the process of drawing. She draws and prints to the rhythm of an internal count that guided her actions and movements. When making work, Karshan stands poised in arabesque, like a ballerina, over the paper or plate (in the case of her prints), working through her numerical counts which fall at intervals of 2, 4, 8 or 16. The sheet or plate she is working on is moved counter clockwise through 90 degrees in response to the beats of the internal count.  When working Karshan occupies a very particular ‘state’ of mind and body when drawing, her understanding of which was informed by a Master’s degree in Humanistic Psychology. During her studies she encountered D.W. Winnicott’s ideas on ‘transitional space’, which he describes as a mental space from which the creative act flows. Therefore, her drawing flows from a conscious state of alertness and centeredness, informed by these ideas and her Pilates training. As a result, her works can be read expressly as ‘bodily’: the verticals speak of the spinal column and the horizontals of outstretched limbs. Although she is naturally left-handed, she draws with her non-dominant right hand, without the aid of rulers, in order to allow an unmediated connection between her ‘state’ of mind, the internal rhythm and the enacting of bodily marks on the page or plate.  Her entire practice can be understood as a systematic enquiry into the source of creativity and the desire to make marks. In fact, Karshan often talks about the way that she ‘learns’ from the marks, in a sense they have a life of their own: at times staccato and frenetic, at others sustained and controlled. Her drawing has literally embodied these internal rhythms and forms, through mark-making, over the last twenty-two years. This is particularly well revealed in Candida Richardson’s film: ‘Movements and their images’ which looked at the symbiotic relationship between Karshan’s bodily gesture and traces on the paper.

‘Pouncing’ is a Renaissance method of transferring marks from one art work to another in order to ensure a continuity between each work in a series. Karshan uses a very similar process, whereby the ‘ghost’ of one image through the trace points and marks on the back of the drawing are used as starting points for the next drawing. This layered repetition acts as a thread running from work to work and series to series. As well as being a literal part of the drawing process, ‘Pouncing’ provides a wonderful visual metaphor for this exhibition, which forms an introduction to Karshan’s oeuvre. In the exhibition we ‘pounce’ from the earlier drawings of the 1990s, which exhibit the development of her rhythm and the bodily grid, to her collaborations with Candida Richardson and the surfacing of the performance behind the marks, to Karshan’s most recent foray into printmaking - the ‘Glint’ series.

Glint I - VII comprises Karshan’s new set of etched prints undertaken in New York in collaboration with printmaker Gregory Burnett. Karshan’s drawings were marked out on tracing paper, which allowed the drawings to be ‘inscribed’, using a metal stylus, through the paper onto a waxy ground that covers the metal printing plate. In response to the additional resistance of the plate, Karshan incised the mark onto the plate up to four times, twice through the waxy ground and twice directly into the metal. In keeping with the rest of her way of working, she continued to seek out graceful means of enacting marks: sustained by her count, shifting her weight and bringing her concentration to bear fully on the convergence of the line on the plate. You can see the way that the marks evolve across the series of the prints, both in complexity and in the increased surety of the mark. The ‘glints’ or gaps between the lines indicate the moments of pause, rest, intake of breath, before the mark is once again borne down on the plate. The finished plates were then placed in acid, allowing the areas of the plate exposed by the drawing process to be ‘burned’. Burnett, as the printmaker, decided how long the plate needed to be in the acid to get a deep, clean etch and then ‘inks’ the plate, which is meticulously buffed and cleaned to expose the clarity and fragility of the inscribed line.