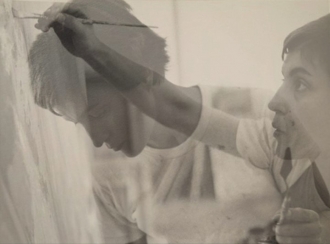 Playing at The New Renaissance Film Festival in Amsterdam

A short documentary/portrait of the painter Regina Bogat, who at the age of 84 had her first solo show at Zurcher Gallery in New York, of work from the 1960’s. These paintings had only been seen once at her loft party back in the ‘60’s. A part of the 10th Street art scene, Regina was the only woman artist working in the Bowery Studio building with Mark Rothko, James Brooks, Ray Parker and other Abstract Expressionists. A natural raconteur and independently minded painter, a friend of Ad Reinhardt and Eva Hesse, Regina subsequently married the painter Alfred Jensen and has continuously painted throughout her life.

Frances Barth was born in the Bronx, New York. She has exhibited her paintings widely in both solo and group exhibitions since the late 1960’s, and her work is represented in numerous public, corporate and private collections.

Early in her career, Frances also performed with Yvonne Rainer and Joan Jonas in New York City in live performance and video/film. Her awards include National Endowment for the Arts grants in 1974 and 1982, a Guggenheim Fellowship in 1977, the Joan Mitchell Foundation grant in 1995, two American Academy of Arts and Letters Purchase awards in ’99 and ’04 and the Anonymous Was a Woman grant in 2006.

For the past fourteen years, Frances has also been working with animation and video.